IT’S the sport that captivates a nation every weekend from March to September.

The Australian Football League (AFL) is the most popular code to watch, attend and punt on in the country. Footy fans are among the most ardent in the world, and Australian enthusiasts are no exception.

Betting on AFL matches takes the excitement and enjoyment to a whole new level. There is no better way to feel part of the action and to immerse yourself in a game than by placing AFL Premiership bets online.

With the AFL being such a busy league, there are many different wagers that punters can place on AFL games. You can place basic AFL bets on who will win a match, with each team having different AFL betting odds, while there is often a points spread where each side is given a points handicap that must be covered. 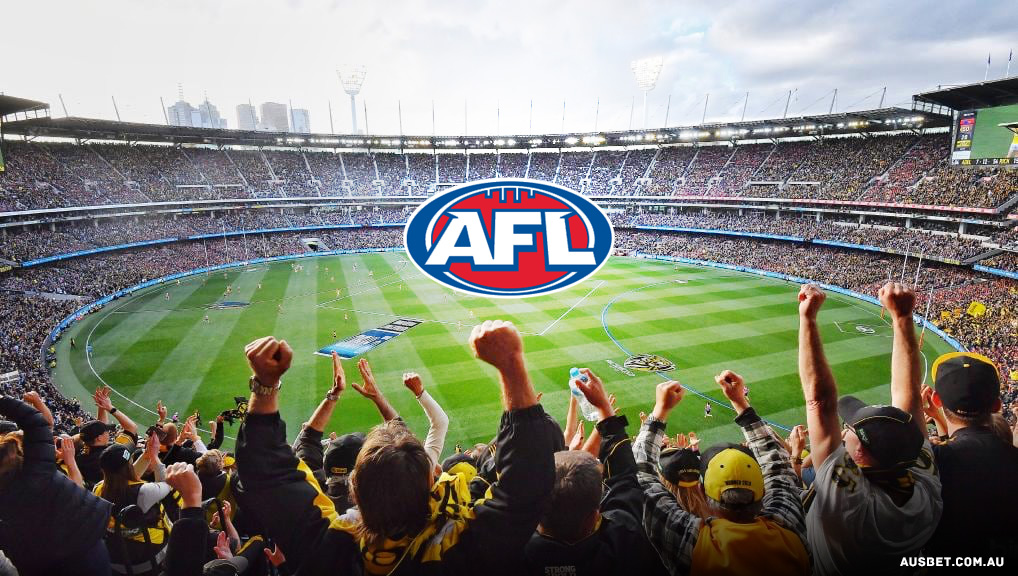 As you get to know teams and players more, you can start exploiting the hundreds of different AFL bet types on offer for each match. These run the gamut from straightforward over/under lines to all manner of AFL exotic bets and player props.

As a result of the rabid support and passion for the game, AFL fans receive the golden treatment from online bookmakers. Along the myriad match betting options available, there are futures bets, novelty markets, and a stack of AFL betting promotions and bonus offers from week to week.

All of the online bookmakers featured on AusBet.com.au take bets on AFL footy. We only recommend licensed and regulated AFL betting sites that offer competitive odds, a wide range of markets, secure banking options and excellent customer service. Tap the buttons in the table above to see what’s on offer and read our in-depth bookmaker reviews.

What is the Australian Football League?

The AFL is the highest level of professional football in Australia. The 18-team competition has nine home and away matches per week, spread over 23 rounds. The AFL Premiership season typically begins in the last week of March and a four-week finals period with eight qualifying teams begins in September. The campaign culminates in the AFL Grand Final, which decides the league’s champion.

The AFL traces its origins to the old Victorian Football League (VFL), which was established in 1897 with seven teams from the Melbourne metropolitan area and one from Geelong. The VFL expanded to 12 teams in 1925 and remained that way until the 1980s, when South Melbourne relocated to Sydney and two new interstate teams – Brisbane and West Coast – joined the competition.

Those early expansion moves led to the creation of the first national league for Australian rules football in 1990, when the VFL was rebranded as the AFL. Teams from Adelaide (1991), Fremantle (1995), Port Adelaide (1997), Gold Coast (2011) and Greater Western Sydney (2012) have since entered the competition, while Brisbane and Fitzroy merged after the 1996 season to form the Brisbane Lions. There are now 10 Victorian teams and eight from other states, with two each from New South Wales, Queensland, South Australia and Western Australia.

The AFL attracts the biggest crowds of the all the Australian sporting codes and dominates television ratings. With many games telecast live on free-to-air networks, a dedicated TV station on cable and a great streaming service for online viewers, football fans can watch their team play live from anywhere in the world, on almost any device.

One of the most popular betting brands in the world. Known for early markets and big-priced advertising campaigns. #ad

Visit Bet365
GETON is not a bonus code and does not grant access to additional offers. Min deposit requirement. Free Bets are paid as Bet Credits and are available for use upon settlement of bets to value of qualifying deposit. Min odds, bet and payment method exclusions apply. Returns exclude Bet Credits stake. Time limits and T&Cs apply. New customers only. #ad Full T's and C's.

When betting on the AFL, it’s crucial to take note of where the match is being played and who has home ground advantage. As the AFL does not enforce a uniform rule for the size of its playing fields, many of the grounds have slight differences, which can result in different game plans and styles from team to team. Playing on a different-sized ground, in a different climate, in front of a hostile crowd means that the home ground advantage is a very real and substantial variable in the AFL.

Betting on the AFL

Some of the most popular betting markets on the AFL include:

Each of these bets, excepting live betting, can be placed well before a match starts. Bookmakers will often have odds released up to a week in advance of each match, with more detailed player markets released after team selection closer to the weekend.

No matter your personal interest in a match, there is a betting market for it in the AFL if you look hard enough.

It’s always important to have different online bookmaker accounts, because bookies will often offer different markets and different odds. It’s always best to do your homework and get the best bang for your buck.

Sportsbet is Australia's largest corporate online bookmaker with a wide range of markets and promotions for registered customers.

Futures markets betting in the AFL

One of the most popular Australian traditions on AFL sports betting sites is picking out your future bets at the start of each season, then watching how they unfold over the next six months.

The most popular AFL futures markets include:

These markets typically open just hours after the previous season has finished, and they will stay open and evolve throughout the course of a season.

For example, you can place on a bet on a player to win the Brownlow Medal before the start of the season, then watch that player’s odds grow or shrink depending on his form from week to week. Like any fixed odds bet, if the price changes throughout the year, your initial odds and prospective return will remain unchanged. So, with this in mind, it’s always handy to do your research and uncover which players and bets represent value at the start of a season.

When you include betting for the Brownlow Medal, Coleman Medal and Grand Final, AFL futures betting is arguably the most popular form of wagering in the sport. Like the Melbourne Cup, it is a national pastime to have at least one wager on the sport’s biggest occasions. 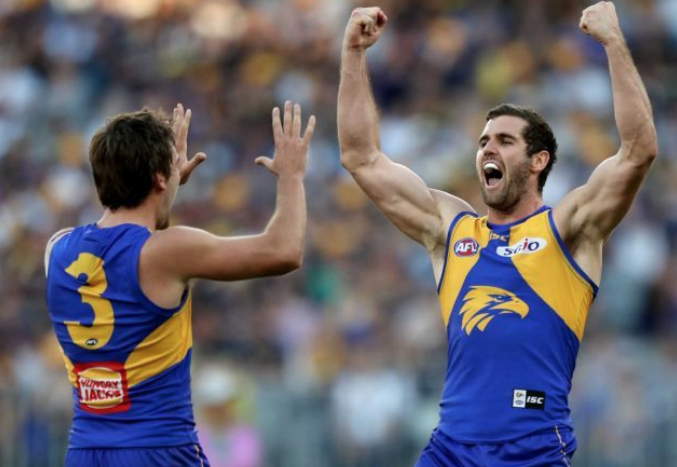 In many instances, online bookmakers will now pay out early on futures markets they believe to be ‘done and dusted’. This is worth taking note of when you sign up with your next bookmaker – especially if you like getting your hands on your winnings early!

If a bookmaker, for example, thinks that Fremantle star Nat Fyfe is a certainty to win the Brownlow Medal this year, it will reward punters with early payouts on the bet in the hope that they reinvest their winnings on other AFL futures wagers.

How does head-to-head betting work in the AFL?

Head-to-head betting in the AFL is the same as for any other sport around the world. Two teams take the field, but only one can walk away the winner. Who’s it going to be? Take a look at the odds, pick your team and cheer them home.

Head-to-head odds are engineered purely for a win without considering margins, lines, or other factors within the game. The only thing the team you picked has to do for you to collect your cash is win the game, even by one solitary point.

At the start of the week, the bookmakers will set odds for a match. Those odds will then fluctuate depending on betting behaviour from punters in the lead-up to that match.

Home of the Neds Toolbox

Neds emerges as Australia's newest online bookmaker . It's fresh, exciting and well worth a look.

For example: Geelong plays Richmond on Saturday night. Earlier in the week, Geelong was paying $1.45 to win, compared to Richmond’s $2.60. If enough punters bet on Geelong at $1.45, bookmakers will respond by lowering the odds further to protect themselves, winding Geelong into $1.30 or even $1.25 to deter.

It has happened many times before that a team has started a match paying just $1.01 against a lowly opponent. Underdog teams in the AFL have been known to start as long as $10 for the win in a two-horse race if they are up against a far superior opponent.

The longest odds a club has ever overcome was $15. On that occasion the Greater Western Sydney Giants created history by beating the heavily favoured Sydney Swans, creating the biggest upset in terms of head-to-head odds in AFL history.

How do I place an AFL line bet?

The lines given to each AFL team by bookmakers work much like golf handicaps. In essence, the par score is adjusted so the favourite gives up a certain number of points to the outsider.
A typical AFL line betting option will look something like this:

For Richmond, the -17.5 means they are giving up a 17.5-point handicap for the match. If you bet on the Tigers at the line and they fail to win by more than 17.5 points, you will lose the bet, even if they win the match. 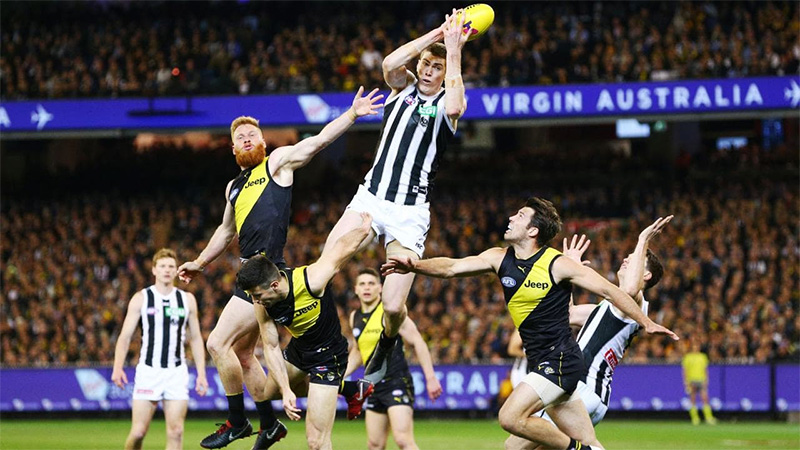 Conversely, in this scenario Collingwood is given a 17.5-point head start. So, if you bet on the Magpies, you can still collect even if they lose – they just need to do no worse than a 17.5-point loss.

Line betting is a way for bookmakers to even up lop-sided contests and keep punters interested in the match. To calculate lines, AFL bookies will take in a number of factors including current form, past encounters, home ground, injuries, average scoring numbers and more.

While you may think you see a mistake in a line offered by bookmakers, always be aware that the bag men have done all of the homework and come up with every set of odds for a reason.

Some AFL betting sites even allow you to design a fantasy team of all your favourite players, which becomes even more fun if your dream team is deemed the best and you are rewarded with a sizeable prize. Fantasy AFL betting is great fun and offers a whole new dimension in the way you can wager. You get your pick of team players and coach, but the scoring system works on real-life results. This is the ideal option for the avid AFL betting fan, and one that many punters often explore for added rewards.

As always in online Australian sports betting, it is recommended that you research teams and players as much as possible before making any AFL bets. It’s important to follow the facts and also trust your instincts, and the more AFL footy betting you place the better you will become at doing this. As far as possible you should also try not to let your emotions influence your decisions, although this can be quite challenging for die-hard footie fans with long ties to a team. Consider AFL betting odds, sports reporters’ opinions and player and team statistics as you make your decisions.