Since its inception in 1995, the annual ANZAC Day clash between Collingwood and Essendon has become one of Australia’s most celebrated Australian sports betting traditions.

Millions tune in on April 25 every year to watch two of the AFL’s fiercest rivals do battle in front of a packed house at the Melbourne Cricket Ground. It’s not all about football, of course, as the pre-match ceremony honouring the nation’s fallen troops is what makes ANZAC Day at the ‘G such a special occasion.

But once the Last Post has sounded and the minute’s silence is up, it’s game on.

With everything that’s happened in the lead-up to AFL 2019, this year’s big clash at the MCG could be the tightest contest in years.

After missing finals last season, the Bombers are widely tipped to climb the ladder in 2019 after an impressive recruiting drive and the return of its biggest star.

The Bombers, to the surprise of many, were able to recruit former GWS star Dylan Shiel to the club to fill a great need in the Bombers’ engine room. Shiel is one of the game’s best midfielders and in a game that increasingly requires more players capable of playing through the centre, he will give real legitimacy to an Essendon side that already boasts Dyson Heppell, Zac Merrett, Devon Smith and David Zaharakis.

In addition to that, Joe Daniher, the club’s biggest star and one of the league’s most dynamic forwards, will return from an osteitis pubis injury that ruled him out for most of the 2018 season.

After starting the season in horrible form in 2018, the Bombers found form on the run home and will bring belief and momentum into a season in which they will start as $12 favourite to go all the way.

Collingwood will come into this year’s ANZAC Day match with confidence and the backing of bookmaker after coming within one kick of the premiership in 2018.

The Magpies, which went from 13th on the ladder in 2017 to 4th and a Grand Final appearance the year later, has added former Brisbane captain Dayne Beams to its already league-best midfield and will be tough to beat if they stay fit.

The ANZAC Medal is awarded every year to the player whose performance best embodies the ANZAC virtues of skill, bravery, mateship, honour and self-sacrifice.

Much like the Norm Smith Medal for best on ground in the AFL Grand Final, it is one of the hottest footy betting markets of the season.

To date, the award has gone to a player on the losing side just once: in 2001, when Collingwood’s Chris Tarrant starred with five goals in an eight-point defeat. 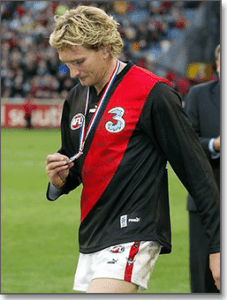