﻿
The Melbourne Cup is the premier staying event in Australia and has long been touted as the “race that stops the nation” and is held on the first Tuesday every November at Flemington over 3200m.

The Melbourne Cup is now big business in betting, racing vision, fashion, tourism and data.From the start of the Spring Racing Carnival thousand’s of horse racing news articles guides will be produced on everything from Melbourne Cup horses, to what to wear, and even where to be seen. But for purists like ourselves at Ausbet.com.au, it all about the punt!

Hosted annually by the Victoria Racing Club at Flemington, the Melbourne Cup is one of the world’s most prestigious equestrian events. This classic horse race is known as “the race that stops a nation”, and attracts horses and riders, spectators and punters from around the world.

Melbourne Cup betting makes for Australia’s biggest horse racing betting pool, no doubt due to the horses’ quality handicap, as well as the presence of international riding legends. For many years, the only way to place Melbourne Cup bets on this race was to visit the local bookmaker or have a friendly bet going among friends or colleagues. 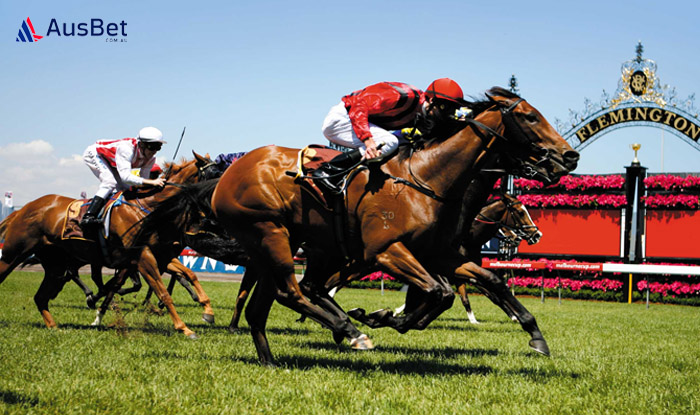 The Melbourne Cup is run over 3200m at the Flemington racecourse in Melbourne, Australia, and attracts many of the best stayers in Australia and abroad. In recent years international trainers and connections chasing the huge purse on offer have flooded Australia creating a slight uproar from local trainers, who say the raiders are being favoured.

The Melbourne Cup is open to horses who are three year old and over and it is a quality handicap, with the minimum weight allocated 50kg. The nominations for the great race usually close in August, with the weights issued in September, just over a month out from the jump.

The next running of the Melbourne Cup will be on the first Tuesday in November 2021 – Tuesday 2nd November 2021.

History of the Melbourne Cup

Ever since Frederick Standish put forward the idea of a horse race called the Melbourne Cup in 1861, Australia has been captivated by what has now become the most spectacular handicap race in the world.

The Melbourne Cup is the world’s richest Thoroughbred handicap for three year olds and up and spans 3200 metres – or two miles in the old measurements. It is held at 3pm every year on the first Tuesday of November at the Flemington Race Course in Melbourne.

The total prize kitty dolled out to the first 10 across the post is $6.2 million with $4.4 million of that going to the first place runner.

Every bookie worth their salt in Australia takes bets on the Melbourne Cup. However we have orchestrated a list of our usual suspects. This collection of bookies is trusted, easy to use and offer regular promotions and are who we think are the best bookmakers for the 2021 Melbourne Cup. The Melbourne Cup attracts significant betting interest all year round, with bookmakers usually having odds up for the next running of the cup, just days after the last one has been run.

Australian’s cannot have free bets advertised to them, but overseas readers can. This is because of the Interactive Gambling Act, which makes it illegal for betting sites to offer Melbourne Cup free bets for punters in Australia. Betting on the Melbourne Cup overseas has grown in popularity over recent years.

The Melbourne Cup attracts the owners of the world’s best horses, and sees approximately 400 horses entered annually. The horses are then paired down, based on various factors such as previous race placements, the amount of prize money they’ve won, and their handicap weight.

There are also certain races that take place around the world, whose winners are guaranteed a spot in the Melbourne Cup, should their owners apply to run in the race.

In Australian racing you are guaranteed a run in the Melbourne Cup if you take out the Andrew Ramsden Stakes, Caulfield Cup, Cox Plate, the Bart Cummings and the Hotham Handicap which is held just three days out from the Melbourne Cup.

It could certainly pay punters to familiarise themselves with the entered horses and their track records before getting down to real money Melbourne Cup betting.

This means that punters will receive the payout from the Melbourne Cup betting odds that offer the largest payout. These are usually Win bets, and are the ones most commonly placed by new and casual punters.

Serious punters who bet on placers or winners in multiple races could win a fortune if they correctly pick the winners of two, three or four Cup races.

The Melbourne Cup odds for 2021 were released minutes after Twilight Payment’s win in the 2020 Melbourne Cup, but with plenty of racing to be held in the 365 days between Melbourne Cup’s all-in punters were quick to get involved with futures betting.

As of June 1, 2021 last year’s runner-up Tiger Moth is the $15 favourite to take out the 2021 Melbourne Cup, with Prince Of Arran who finished third in last year’s race sharing favouritism in this year’s event.

The Melbourne Cup – The modern years

It seems as though the Melbourne Cup grows in popularity and drama with each passing year. Here is a quick recap of the last five years.

Past winners of the Melbourne Cup

Here is a list of the last 25 years worth of Melbourne Cup winners. Listed are the year, name of the horse, name of the winning jockey and the horse’s trainer.

Makybe Diva is the most successful horse to have ever graced the Melbourne Cup, having won three Cups back to back (2003-2005).

Bart Cummings is the most prolific trainer of winners at the Cup with a staggering 12 Cups to his name spanning from 1965 to 2008.

Bobby Lewis and Harry White hold the record for the most Cups won by a jockey with four a piece.

In 2015 Michelle Payne defied history and became the first female jockey to ever win the Melbourne Cup. She did so aboard the 100/1 rough Prince Of Penzance and also handed Darren Weir his first Melbourne Cup as a trainer.

Horse handicaps can add an interesting element to betting at these top Australian sports betting sites. For this race, standard handicapping has been modified to make for quality handicaps.

Top running horses of lesser weight than some other horses may be required to carry weighted ballasts, essentially putting all horses on an equal footing.

To enjoy online betting and more, all you need to do is open a punter account at these recommended Australian betting sites, and then fund it, using any one of a number of fast, safe banking options.